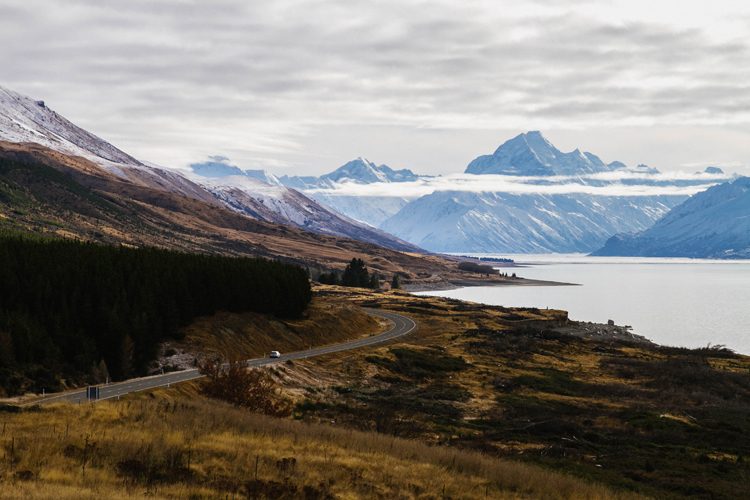 Day Deux was originally intended as a day to explore around Lake Tekapo because of the “partly cloudy” weather forecast, we canned that quickly when we glimpsed Mount Cook clearly in the distance across Lake Pukaki from Lakestone Lodge. 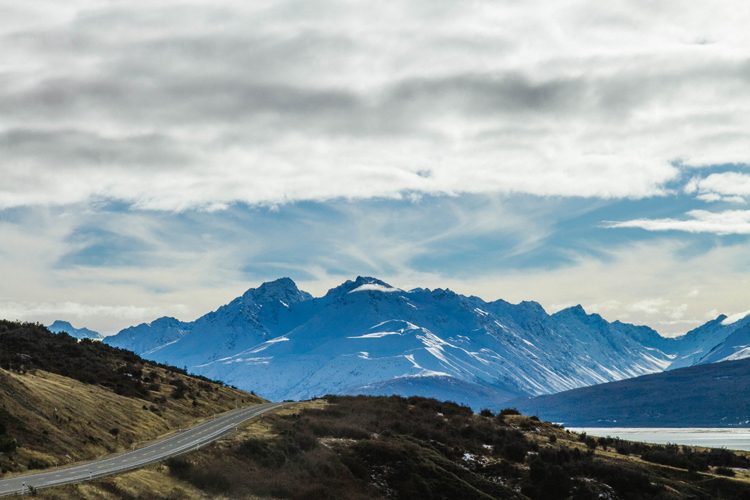 Mike our host confirmed our thoughts when he said he usually tells people to go for it when you can see the peak. Done. We changed quickly from day gear to cold weather hiking gear and zoomed off to get a close up glimpse of Mount Cook. 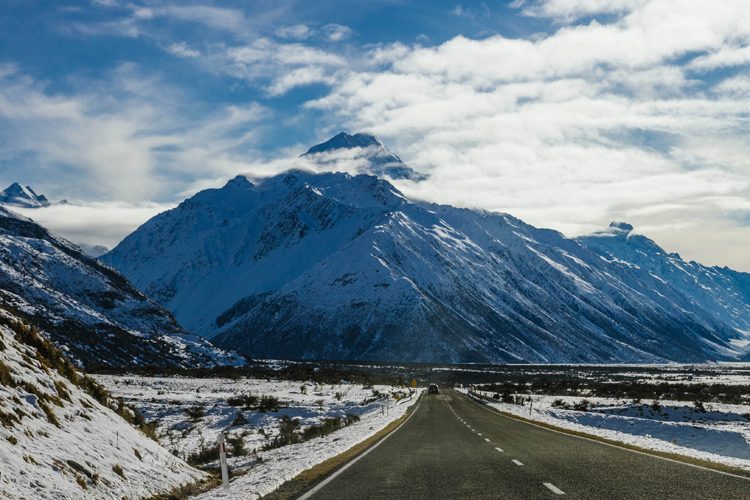 We got more than we bargained for. An entire day of admiring Mount Cook and his neighbouring alps. Deciding to do the Hooker Valley trail again, we got some info from the DOC visitor’s centre and started our 19km walk on the trail. 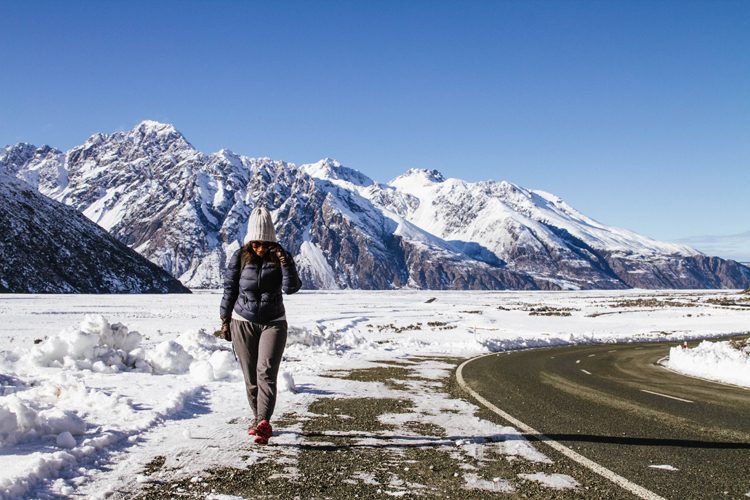 The roads were all closed so instead of driving and parking at the trail’s start, we had to walk from the visitor’s centre to the start of the walk which is pretty far in itself. 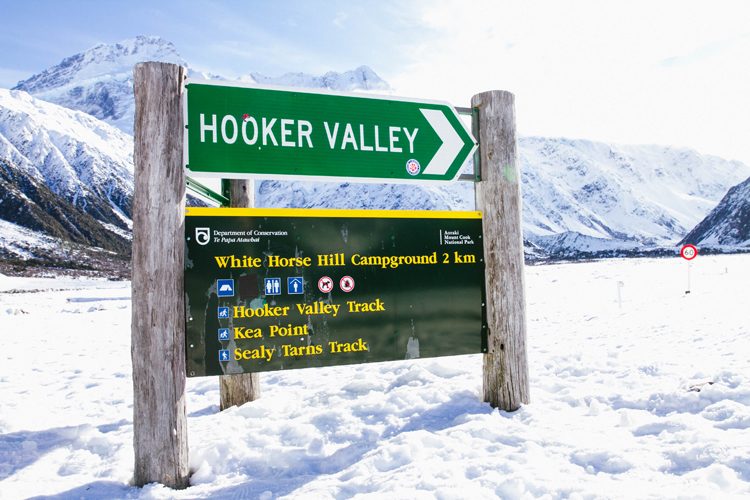 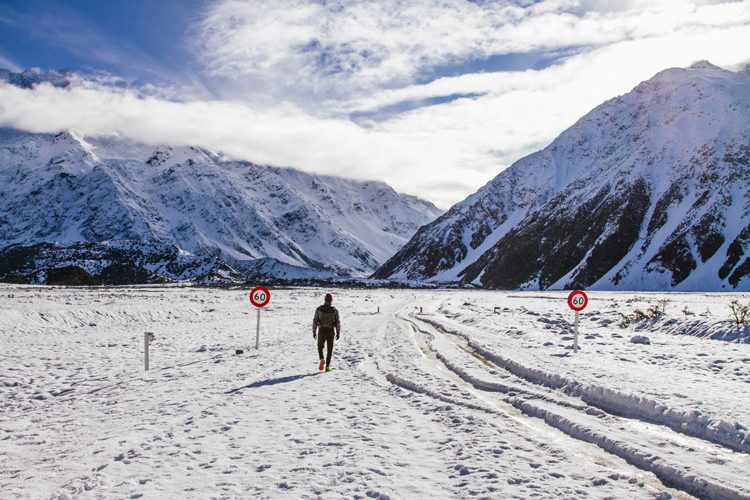 The entire walk was in thick snow, at least half a metre worth of snow cover. We learnt pretty quickly to stay on the crunchy snow and stay off the snow that had been compacted down to hard ice. 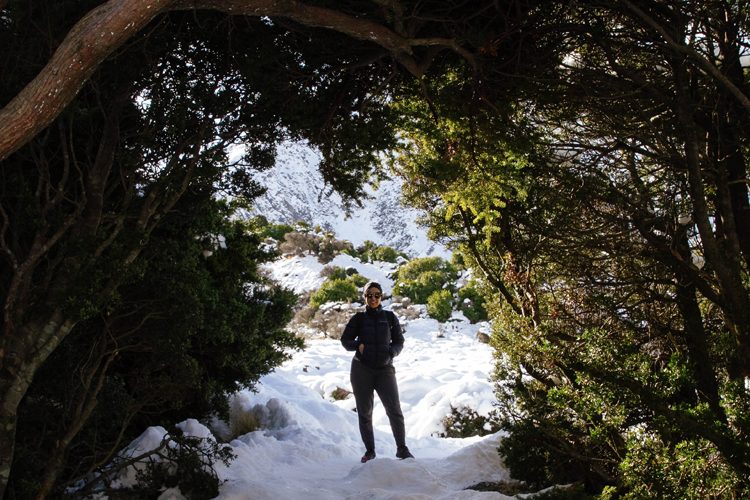 It was our first walk in snow and we were a bit worried not having hiking boots, but we didn’t want to buy them just to do 2 walks in the South Island. So we’d bought some merino hiking socks which were fabulous at keeping our feet warm most of the time. I slipped a few times on the more icy parts, and you definitely had to concentrate on where you were putting your feet. 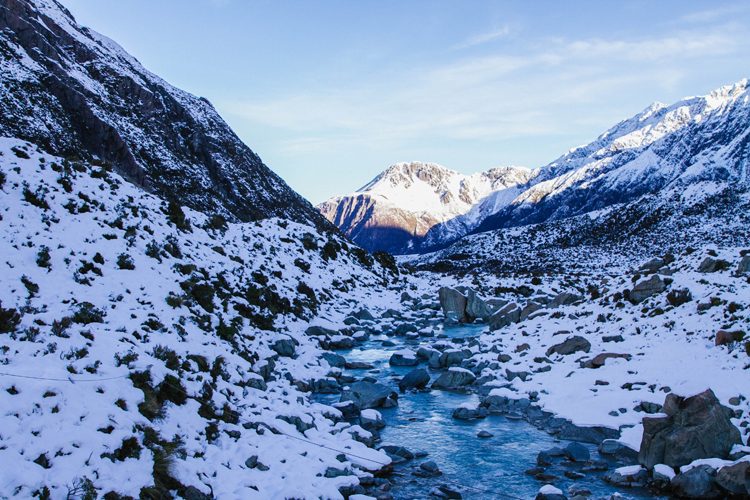 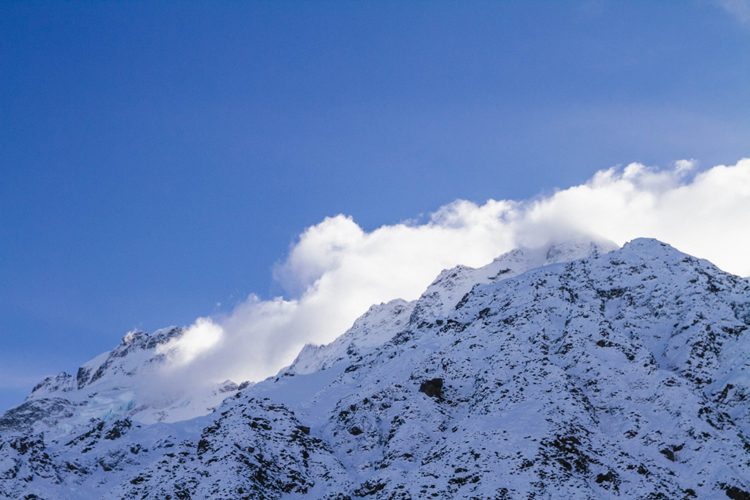 There were a few hairy moments on icy stairs we tried to side step, but it was all worth it for the view of Mount Cook once we rounded a corner halfway, and then when we arrived at the Hooker Valley glacier and seeing that the lake had frozen over. There were a few people making their way like penguins across the ice and onto the iceberg. 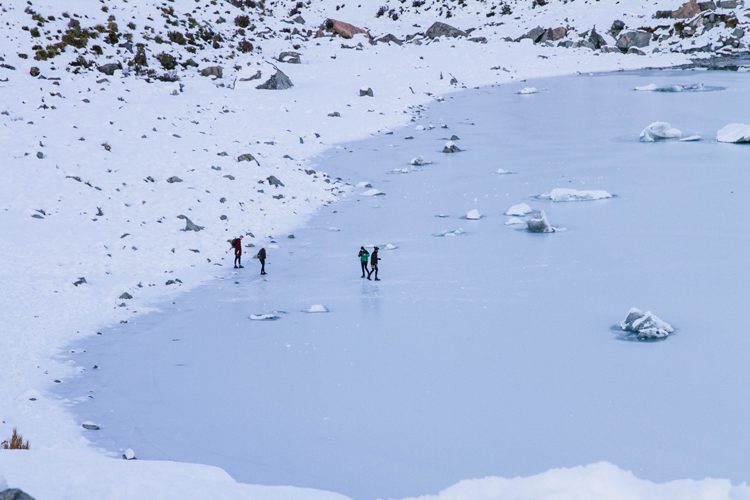 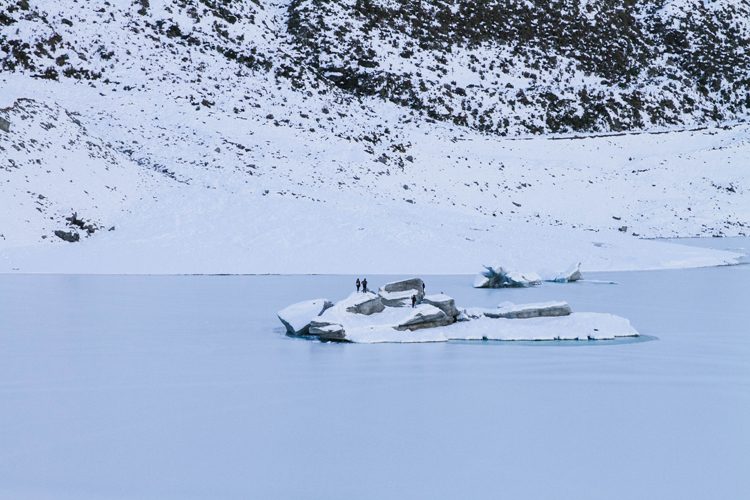 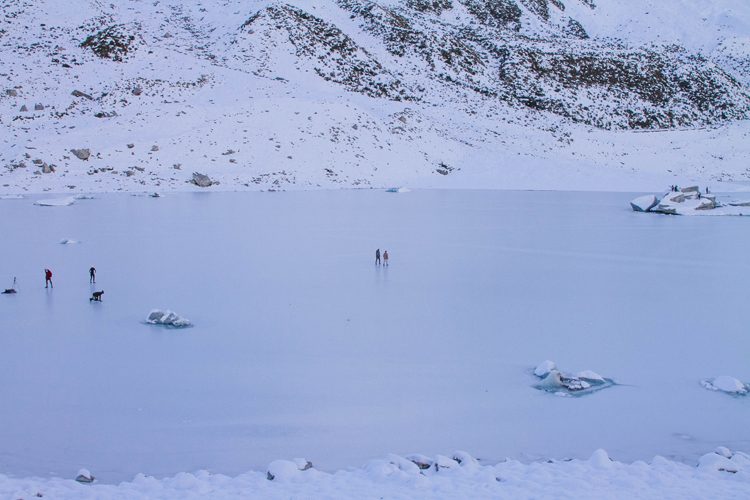 We scampered down as well and slid our way onto the ice. 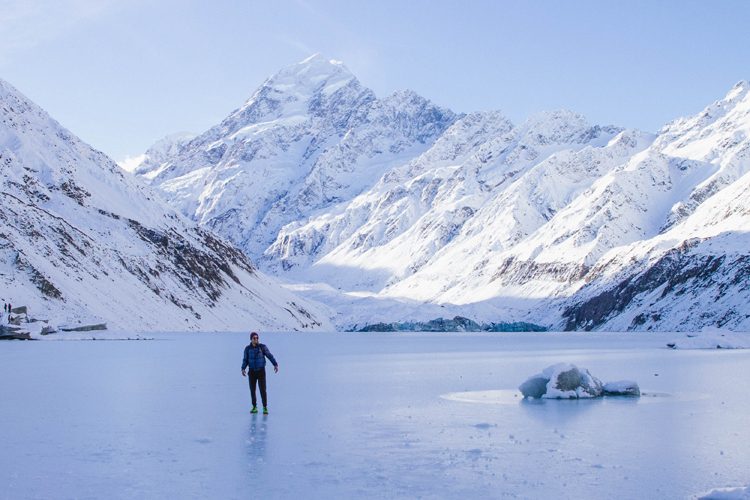 We had a ball, and spent ages just sliding and walking around and taking a million photos. It’s one of the best things we’ve ever done, hands down. 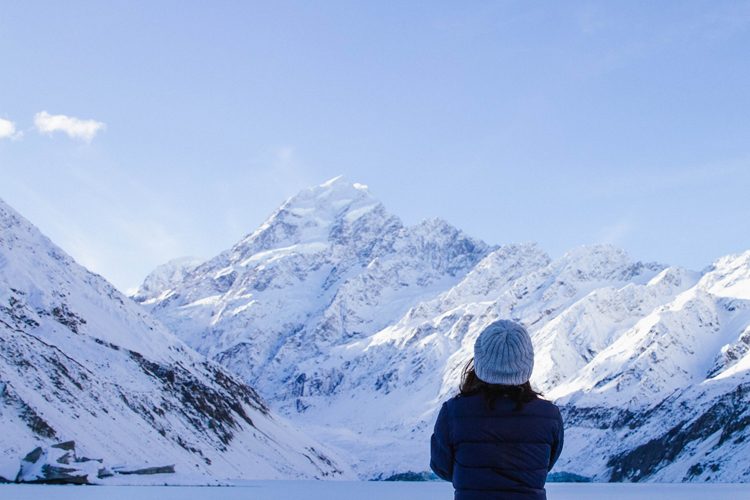 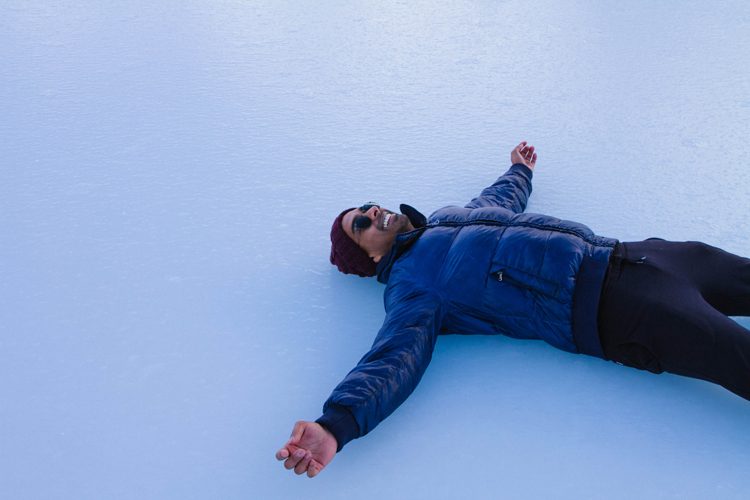 We didn’t want to leave but knowing that it would get dark soon and we had another 2 hour walk back to the car, we left the glacier with hearts as high as kites and zoomed back. 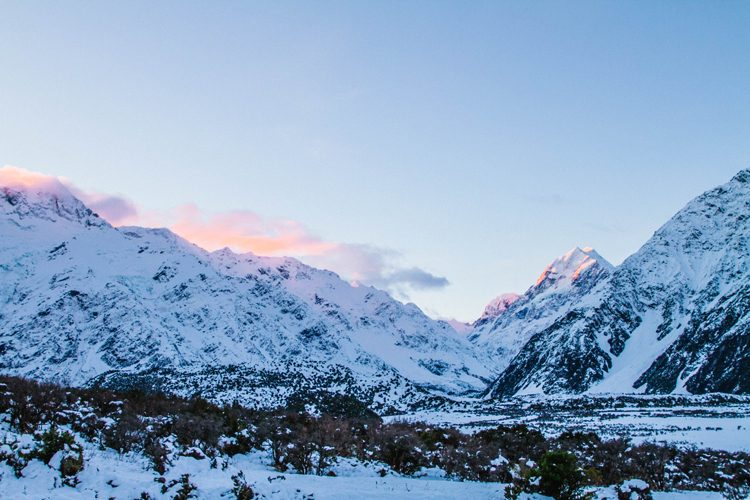 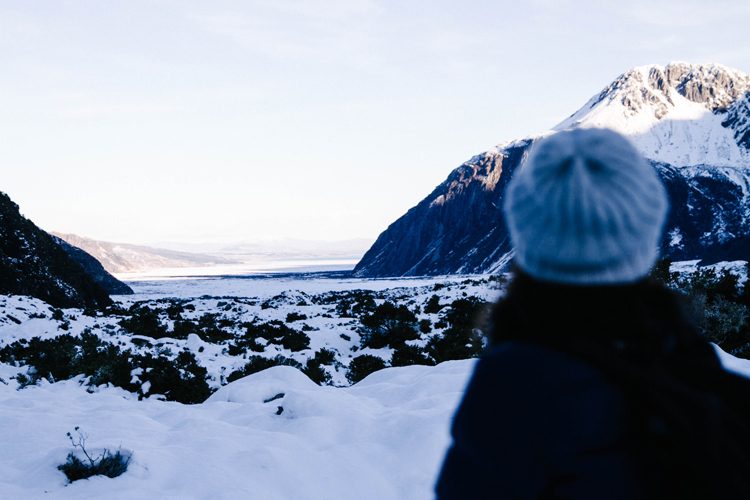 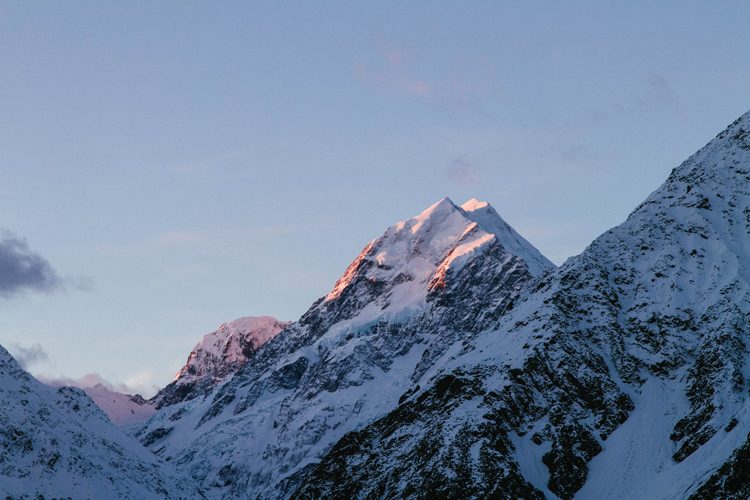 On the way back we took the Kea Trail to the visitor’s centre where there was this ridiculously iced over a section of track next to an embankment. We eventually made it through and also ended up adopting a lady who kept slipping on the ice and was by herself, the poor thing. 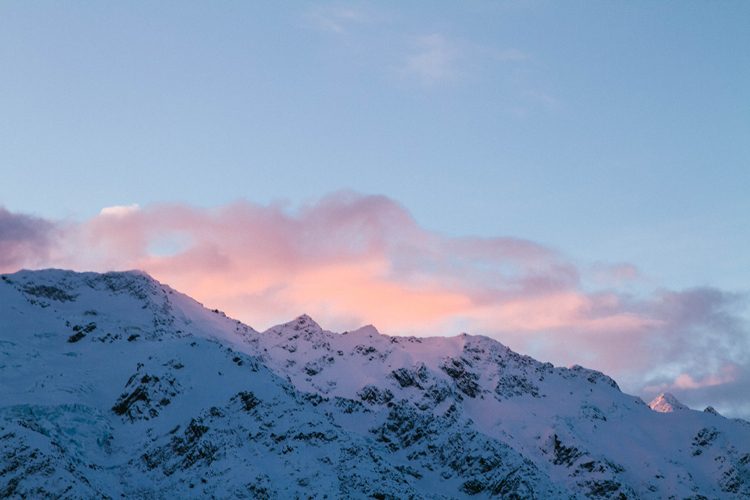 On our drive back we saw the full moon rise over the mountains which was absolutely stunning. After a warm shower back at the lodge, we went to dinner at Shawty’s at the nearby town Twizel (where there isn’t much else to see). Dinner was surprisingly good and we scoffed down some beef cheeks with cauliflower mash and a duck confit on mushroom risotto; with a side of waffle cut fries with aioli. 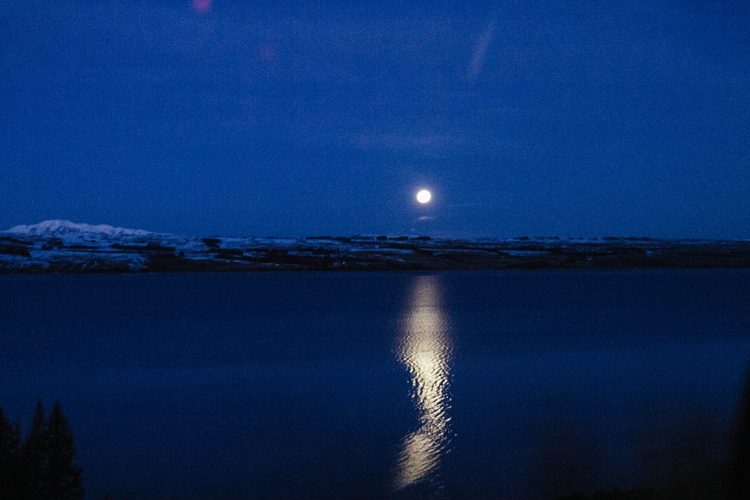 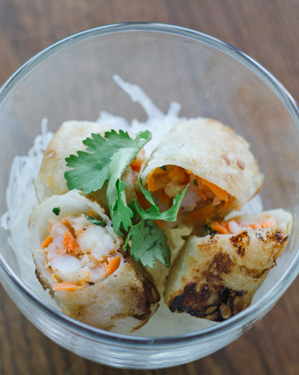 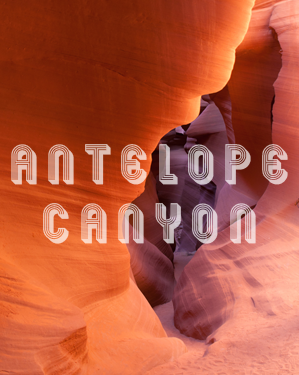 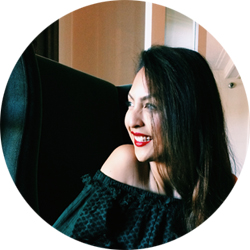 Hello! I'm Nina and I live with my husband Kran and labradoodle puppy Arnold in Melbourne, Australia. I'm a professional by day and a nerd by night. I am: obsessed with food, an accidental coffee snob, always hungry, infatuated with yarn and crafty ventures, sunshine bathing, sometimes outdoors adventuring, labradoodle lover.
This blog is a mash up of our adventures and non-adventures alike. You can read more here!